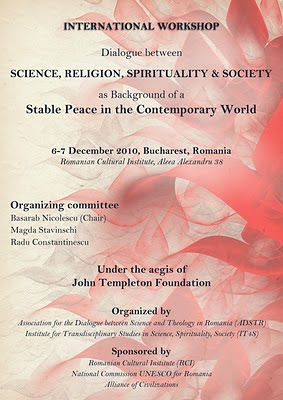 The Joy as a source of peace in different religions: its common origins in Christianity, Hinduism, Buddhism…
The joy, or rather, the Joy with a capital letter, is a founding value in all the living spiritualities of the world. It is as old as the humanity, the source of peace and non- violence in the humankind, mentioned by the most well-know philosophers and by all the religious texts, from the West to the East.
In this workshop, Dr Antonella Verdiani will introduce this concept which refers to her academic research and is developed in the training workshops that she is currently being given on « education for joy. » Her thesis also refers to the recent discoveries in the field of neuroscience, for example the works of Professors Damasio and Beauregard or those currently being developed by the “Mind and Life Institute” in United States, supported by the Dalai Lama.
Starting from a transdisciplinary approach, the author will propose to come out and go beyond the disciplines: from psychology (for which the joy is a simple emotion) to different spiritualities and philosophies (Christianity, Hinduism and Buddhism), that defines Joy as a peaceful “state of being” that connects people among them and to Heaven and Earth.